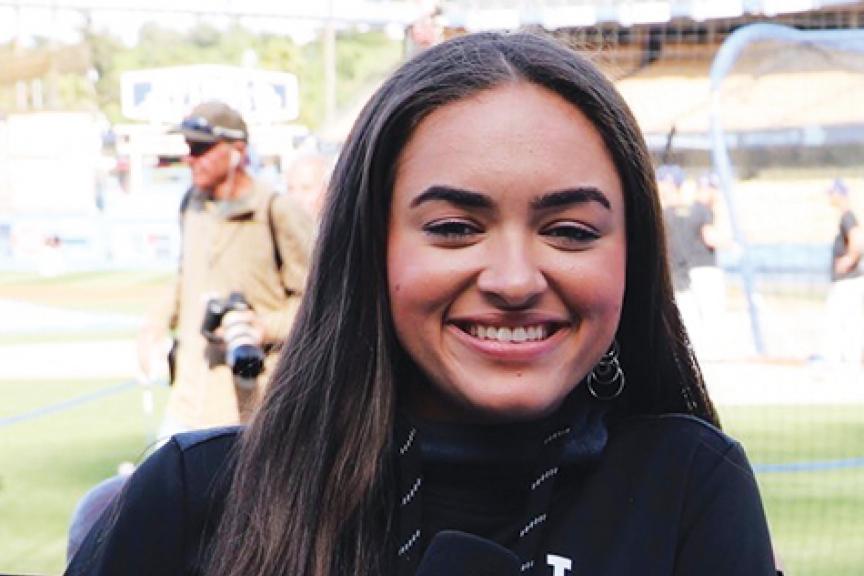 After graduating, I did an internship in the New York Mets’ production department. Even though it was behind the camera, it prepared me for what I would be doing with the Los Angeles Dodgers. In March 2018, I moved out to Los Angeles, and it was a huge jump for me. Even though it was only a part-time job, I had to go because it was such a great opportunity. Shortly after I moved out there, I became UCLA’s in-game host for football, which has a completely different structure. Then UCLA was looking for women’s basketball hosts, so I decided to do that. I have also filled in for the men’s basketball team.

In between, I created and planned K-pop (Korean pop music) fan events, and interviewed fans outside of concerts. It’s way different from being with an established organization or schools like the Dodgers, U-M, and UCLA. I’m starting from scratch as a fan who wants to get other fans together in an official capacity. I always knew I liked entertainment and sports, and I enjoy listening to K-pop. In addition to sports, I host a K-pop podcast and help produce two others. Right now I’m living in Seoul, South Korea, for the next year (probably more) because there are a lot of opportunities here. I’m teaching at an English Academy during the evening, so during the day, I work on the podcasts and arrange meetings.

What’s the difference between in-game hosting for baseball, football, and basketball?

Baseball is more relaxed compared to basketball, which requires a lot more energy and excitement. Football requires a bit more energy than baseball, in my opinion. The stops in football and basketball are planned per time out or quarter break, but it can sometimes come very quickly and unexpectedly if a coach decides to call time outs back to back. It keeps you on your toes! Basketball and football also require more crowd interactions where the host has to ask the crowd to “Get Loud” or “Get Hype.” I’m a low-energy person, so that’s always interesting mustering up the courage to get so energetic. With baseball, I do a lot more interviews with first pitch or national anthem singers, and I am usually with a co-host for baseball games, specifically during pre-game segments.

How has your Sport Management degree contributed to your success?

Kelli Donahue (Sport Management lecturer) taught me the importance of networking. I used to get stressed out by networking during my first and second years of college. I knew I had to go to them, and I got more comfortable over time. Now, it comes naturally in professional settings. It’s natural to want to connect and get to know people professionally. I’m learning, though, that I’ve been so conditioned to talking to people in professional situations that becoming friends with people outside of where they work is something I need to relearn. With that, I learned that networking isn’t making a one-time connection and then asking about a job or to make an introduction to someone. Networking is about building genuine relationships with people. You never know who you’ll meet, or where they’ll end up, and creating genuine friendships with people and keeping up with them is valuable. I found, over the years, there are certain people I would have never imagined working with. I think just being a genuine person and having that desire to connect with other people for professional and personal reasons is something I value and learned from Sport Management.

Due to the program’s size, I got to know my classmates and develop a comfortable rapport with them. I also had the flexibility to do internships with U-M Athletics, and my professors understood the value of networking and internships and worked with you when events came up you had to attend.

Tell me about your experience in the Sport Management program.

Sport Management is very hands-on compared to other majors. I remember Dr. Tom George’s (assistant professor of clinical practice in Applied Exercise Science and Sport Management) psychology classes where he talked about injured athletes envisioning themselves performing well on the field and it helps them get better quicker. It’s almost like a placebo effect. What it taught me at the time was you’re manifesting and visualizing what you want and then going to get it. Now I think about manifestation all of the time. We also did breathing exercises in class to teach us about meditation. At the time I was like, whatever, but now I meditate a lot.

I also remember the sales class where we had to do a project on selling business to business. Our group came up with the idea of selling a partnership to the Major League Baseball/MLB Network to pair up with Buzzfeed to increase their younger demographic. I also learned public speaking. I used to get nervous, but now it’s what I have to do for teaching and hosting, so I’m glad we had a presentation in literally every SM class. That’s what I liked about my Sport Management classes. We’re not just writing papers, reading books, or only talking in discussion sections, we’re presenting in the front of the class and doing group projects.

Additionally, due to the program’s size, I got to know my classmates and develop a comfortable rapport with them. I also had the flexibility to do internships with U-M Athletics, and my professors understood the value of networking and internships and worked with you when events came up you had to attend.

They drive home the point that networking is key, and now it comes naturally for me because we had to network with people every day. We also had to learn to work with people in a group setting, which is something we didn’t do in other major classes; it was mostly individual work. I also remember the things that apply to life, like the sports law classes, the psychology classes, and SM 217: Business Communication taught by Kelli Donahue. So I think those are the most unique things about the school and Sport Management program.

I would like prospective students to know that they will get to know a lot of people in their cohort. I was in classes with the same people during my sophomore through senior years. You’re going to find a friend to lean on because it can be overwhelming at times; you’re going to become friends with people you like to work with and you’re not going to like working with certain people, just like in real life.

Another thing I would say is you’re going to learn actual life skills, which makes you better at connecting with people. If you want to work in the sports business, relationships are the key. A lot of it is based on who you know and who you have relationships with.

Finally, it’s a fun time. There is a good balance between focusing on class and outside activities. They encourage you to intern within U-M Athletics or with professional teams. You're there to learn, but you’re also there to grow professionally before you graduate so you can be a successful Wolverine in the sports industry or whatever industry you will pursue.