InPACTatHome is Getting Kids Moving - Virtually 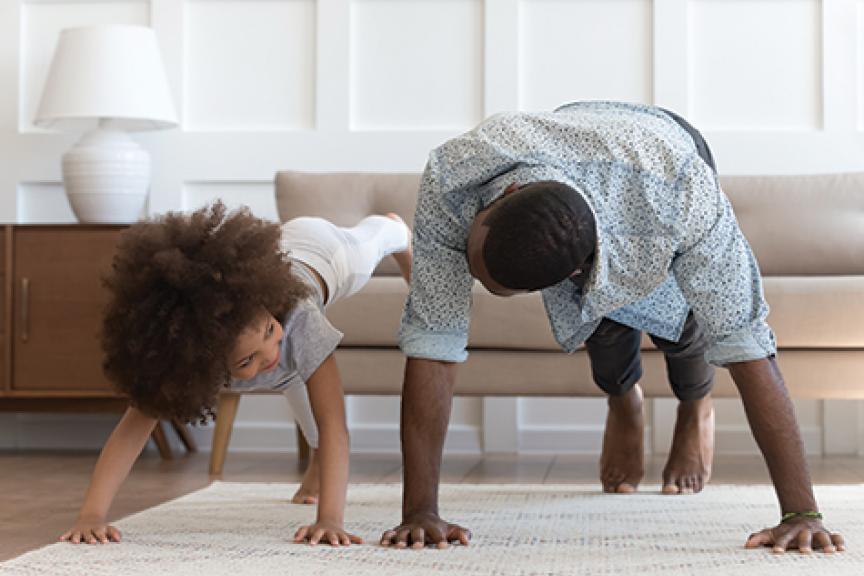 InPACTatHome is getting Michigan’s K-12 students to move – virtually.

The University of Michigan School of Kinesiology and Exercise & Sport Science Initiative (ESSI) are partnering with Detroit Public Television (DPTV) to produce the InPACTatHome video series, which encourages students to get out of their seats and be active during distance learning.

The program was developed by Dr. Rebecca Hasson, associate professor of Movement Science and director of the Childhood Disparities Research Lab, in response to the COVID-19 pandemic. Its main goal is to help offset COVID-19’s sedentary effects on the State of Michigan’s 1.5 million school kids by offering free and universally accessible workouts created in collaboration with physical education teachers.

Detroit Public TV has produced more than 130 videos featuring educators, sometimes with their children or extended families, leading “brain boosts” that involve some kind of movement and physical activity that can be done inside the home.

The eight-minute videos are currently airing on the new statewide education network, the Michigan Learning Channel (MLC), during the hours of 8:00am–noon and 1:00–5:00pm.

“It has been an incredible opportunity to be able to work with the Michigan Learning Channel and Detroit Public Television to broadcast InPACTatHome to every household across the state,” Hasson said.  “One of our goals in developing the program was to ensure that every child has access to quality physical activity programming during the pandemic, irrespective of socioeconomic status and internet access. This partnership allows us to do that.”

Hasson had been wanting to create this video series for a while. When COVID-19 closed down schools last March, she sprang into action to create these movement videos.

What has surprised Hasson is how willing physical educators have been in helping create the videos.

“Everyone recognized that helping our kids stay healthy and active was a priority at this time and everyone we approached said ’I'm in . . . how can I help.’ This really enabled the program to succeed before we even had any funding to support it,” she said.

Before she knew it, it was picked up by the Michigan Learning Channel and received funding from the Michigan Department of Health and Human Services and the Michigan Public Health Institute.

The following week, which included Valentine’s Day, was designated as “Heart Week,” with activities focused on maintaining cardiovascular health.

The final week’s activities concentrated on movements for arms and legs, some of which can be performed while sitting at a computer.

Each week, MLC will feature new InPACTatHome videos and resources.  As a bonus, families that participate will have the opportunity to unlock special videos that the Detroit Lions and Detroit Pistons have produced for the program.

According to Hasson, the videos can also be viewed anytime on DPTV’s app. She has also received emails requesting the videos from parents and educators in Virginia and New York who saw the videos on their local public television app.

“The goal is to give every child across the state and nation an opportunity to achieve the recommended 60 minutes of physical activity every day,” Hasson explained. “The accessibility of InPACTatHome means that we are moving in the right direction and are closer to achieving that goal.

InPACTatHome’s partnerships continue to grow, as well; they recently partnered with the American Heart Association to continue raising awareness about the importance of regular physical exercise.

Learn more about InPACTatHome and watch/download the videos at essi.umich.edu/active-schools-communities.