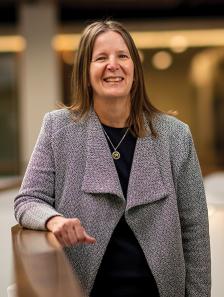 Lori Ploutz-Snyder is a professor of Movement Science and dean of the University of Michigan School of Kinesiology. She received her PhD in Physiology, with an emphasis on skeletal muscle and exercise, from Ohio University.

Prior to her time at U-M, Dean Ploutz-Snyder was Lead Scientist for the Exercise Physiology and Countermeasures Project at the NASA Johnson Space Center in Houston, TX, where she received multiple awards for her work, including the Directors Group Achievement Award; Software, Robotics and Simulation Division’s Elite Team Award; and Life Sciences Recognition of Excellence. She also held adjunct full professorships in the Department of Internal Medicine at the University of Texas Medical Branch and in the Department of Health and Human Performance at the University of Houston. Before moving to NASA, Dean Ploutz-Snyder held several positions at Syracuse University, including Professor and Chair of the Department of Exercise Science.

Dean Ploutz-Snyder has received more than $10 million in grant funding from organizations such as the National Institutes of Health, the U.S. Department of Defense, and the U.S. Department of Education. She has published more than 100 articles in peer-reviewed journals, including Medicine and Science in Sports and Exercise, the Journal of Applied Physiology, and the Journal of Strength and Conditioning Research. Dean Ploutz-Snyder is a member of several professional organizations, including the American Physiological Society and the American College of Sports Medicine, and is a National Academy of Kinesiology Fellow.

Dean Ploutz-Snyder’s research is focused on how to counteract the negative effects of unloading muscle and bone on muscle function and bone composition. She is considered a thought leader in this area due to her innovative models and significant findings of mechanisms that can improve the physiologic function of astronauts during space flight. Dean Ploutz-Snyder's prominence in her field has led to speaking engagements around the world, from the United Nations to the European Space Agency to universities and hospitals.

Dean Ploutz-Snyder’s research is focused on how to counteract the negative effects of unloading muscle and bone on muscle function and bone composition.

To counter the effect of sitting too much, try the astronaut workout
School of Kinesiology Dean Lori Ploutz-Snyder is quoted in a Washington Post story about the impact of astronaut workouts.
Ploutz-Snyder reappointed as dean
Second five-year term runs July 1, 2021 through June 30, 2026
Moving the World Towards Racial Justice
A message from our dean
END_OF_DOCUMENT_TOKEN_TO_BE_REPLACED