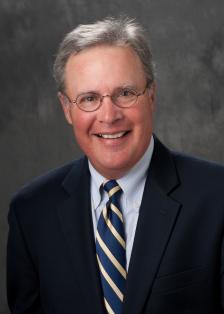 A proud graduate of the University of Michigan (PhD Education, 1978), Dr. Thomas Templin joined the School of Kinesiology faculty in the fall of 2015. He serves as the associate dean for faculty and undergraduate affairs. He is a professor emeritus at Purdue University, where he was a professor in the Department of Health and Kinesiology (1977-2015), its chair (1996-2006), and chair of the Department of Consumer Science (2013-2015).

Dr. Templin’s research has focused on teacher socialization and is grounded in organizational socialization theory, role theory, affective events theory, and teacher resilience. He is an author and editor/reviewer of numerous journal publications, book chapters and books.

Dr. Templin has received various honors, including the McCloy Lecturer by the Research Consortium of the American Alliance of Health, Physical Education, Recreation, and Dance; the Scholar Award from the Special Interest Group on Learning and Instruction in Physical Education within the American Educational Research Association as well as the Curriculum and Instruction Honor Award from the Curriculum and Instruction Academy within NASPE (AAHPERD). A graduate of Indiana University (BS, 1972; MS 1975), Dr. Templin received the John R. Endwright Alumni Service Award in 2014.

Dr. Templin’s academic research/scholarship has focused on role and socialization theory. Specifically, he has examined socialization processes linked to pre-service and in-service teachers alike. He is particularly interested in studying the lives and careers of physical education teachers as reflected in his past work with Sparkes and Schempp and current work with Richards, as well as current doctoral students. Recent research has centered on the status of PE, teacher emotions, Presidential Youth Fitness demonstration centers, the de-socialization of athletic trainers, and teacher evaluation.