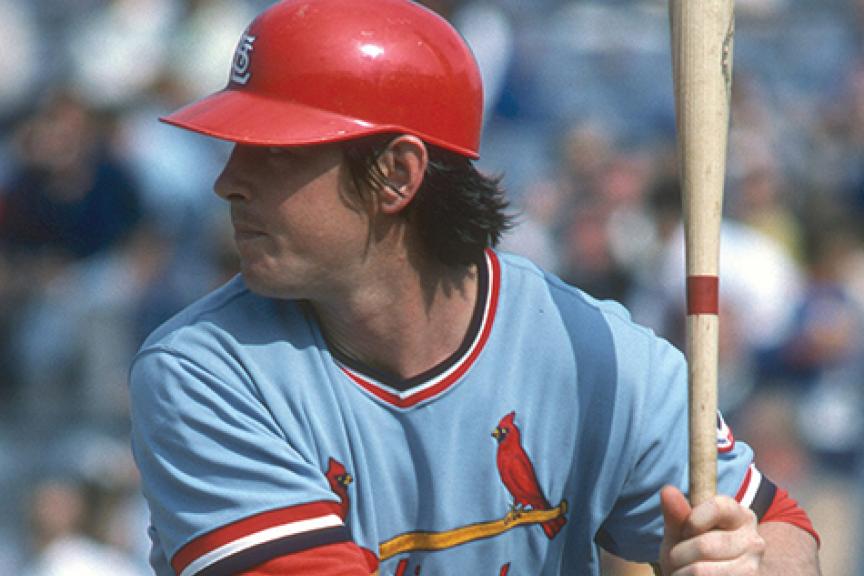 The age-old saying is that it is never too late to get an education.

Ted Simmons, who graduated with a bachelor's degree in Sport Management and Communication in 1996, started U-M as a first-year student in 1967 but switched gears shortly after his college career began.

The St. Louis Cardinals drafted Simmons 10th overall in the 1967 Major League Baseball draft, and he became one of the most prolific hitting catchers in baseball history.

Although Simmons was ineligible to play collegiate baseball after signing his professional contract, he credits U-M baseball coach Moby Benedict for helping him enroll in classes prior to the start of his professional playing career. “Moby stood by his commitment. He knew my admission was solid; assured my family and me that it was. No matter what happened, I was going to be a Wolverine – one way or another,” Simmons said.

Simmons would complete his studies nearly a quarter-century later, always knowing he wanted to finish what he started. So at the age of 44, while working full-time as a baseball executive, he decided to get his undergraduate degree.

“It always sat there with me and I said, ‘I don’t care what I have to do, I’m going back and getting this thing,’” he explained. “So I graduated with a whole bunch group of folks at Hill Auditorium and was happy as a clam and felt like I was 21 again.”

However, it was a juggling act.

“That’s pretty much what life is, especially if you go later in life to get your education,” Simmons said. “You have commitments – you work; you might have kids; you have responsibilities. You have all these things at once sometimes, but you’d be surprised if you really want to do something bad enough you can manage it.”

Now, people often ask to see his ring, thinking it’s a World Series ring. He proudly tells them it’s his U-M graduation ring. “I wear it now and always will because there is a sense of identity there,” Simmons said.

He recalls working as a scout for the Cleveland Indians and getting assigned to scout the Detroit Tigers. He attended class during the day, then drove down I-94 to watch the Tigers play and compile reports to fill his general manager’s database.

Simmons was grateful for how willing the university and school were to accommodate his schedule. Once they knew he was serious and how important it was to him to get his degree, they made whatever accommodations they could. He remembers being told he had to make sure he didn’t miss his lab sections.

Simmons said it was funny to look back on his anatomy classes with students who were 18 or 19 years old.

“They were more suspicious of me than anything. I pretty much assumed, for the longest time there, they thought I was the police, as opposed to a fellow student,” he said. “After a while, I convinced them that I was doing the same thing they were doing, trying to understand anatomy and take the test and pass it.”

Simmons was ultimately satisfied with his sense of completion because he believes that education is something that doesn’t just happen between the ages of 18 and 22.

“I’m very proud of that and the fact that I got it in 1996, as opposed to 1971, which would have been my graduating class. I’m just as pleased about that as I am had I gone straight through,” he said.

Now, people often ask to see his ring, thinking it’s a World Series ring. He proudly tells them it’s his U-M graduation ring. “I wear it now and always will because there is a sense of identity there,” Simmons said.

Simmons played for the St. Louis Cardinals, Milwaukee Brewers, and Atlanta Braves during his 21-year career. In December 2019 his achievements were finally acknowledged as he was elected into the Major League Baseball Hall of Fame by the Modern Baseball Era Committee. He is part of the Class of 2020.

“It’s safe to say the biggest thing that has happened in my professional life, without a doubt,” Simmons said. “Since it’s happened, I’ve been on one massive joy ride after another. I hear from someone new just about every day, and it’s been pretty remarkable.”