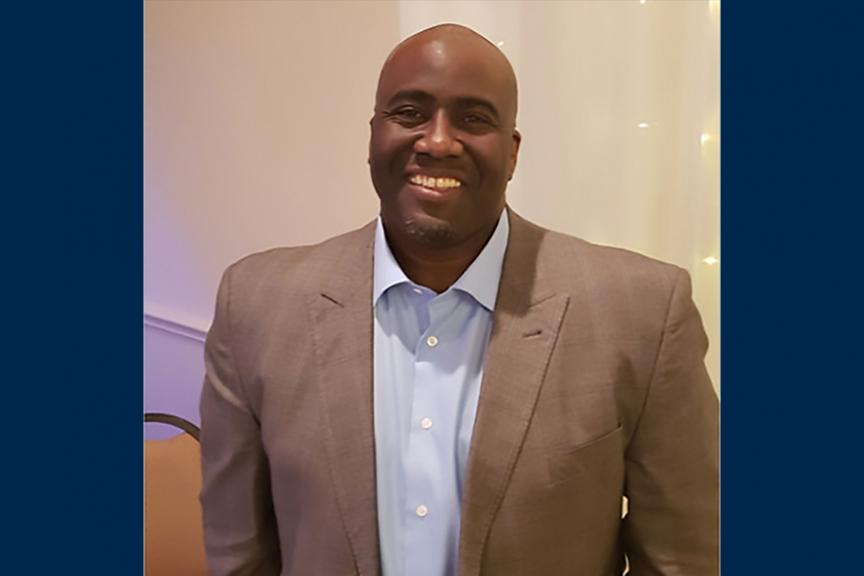 Sidney Johnson has spent his life around both numbers and sports.

Before coming to the School of Kinesiology as a PhD student under Dr. Rod Fort, professor of Sport Management, Johnson taught Introductory Microeconomics and Sports Economics for four years at Grand Valley State University as an affiliate faculty member. He also spent time working in the City of Detroit’s Finance Department, starting as a principal accountant before moving into an investment manager role.

Johnson’s father coached high school basketball and Johnson grew up playing baseball. In 1992, he followed his father’s footsteps and began coaching middle school basketball in Detroit, and the next 24 years saw him mold and shape the young minds of middle and high schoolers on and off the court.

He stopped coaching in 2016 when the opportunity at Grand Valley allowed him to combine his two loves.

“Professional sports, and to some extent college sports, is a multi-billion dollar industry,” Johnson said.

Fort’s research would come up often in Johnson’s research for the sport economics class he taught. So when he started researching Sport Management PhD programs, the School of Kinesiology was high on his list. He then ran across Fort’s posting for a PhD student to mentor.

“I was looking for an opportunity that would help me learn more about the things I was teaching about,” Johnson explained. “I was teaching without having the full background and the full range of other research that had been done instead of already understanding real-life sport economics and the theory behind it.”

“Additionally, I felt like it would be a great fit, and it seems like it has been to this point. It’s everything I could have hoped for,” Johnson said. He said he is currently reviewing sport economics literature, starting with the mid-1950s and progressing into things Fort has written.

“This gives me a good background for when I get a chance to work on research with him next year,” Johnson said. “Rod is very practical and down-to-earth. This is not someone who is going to attempt to pound numbers into your head. This is someone who is going to try to look at the practical, look at what’s happening compared to what is supposed to happen theoretically, and if the theory doesn’t fit the practical, then you know that is something that needs to be talked about or explained.”

“He has given me a different way of looking at things. It’s not just what has been written about before, but it’s applying that stuff to what’s happening and then trying to figure out why that’s happening,” Johnson continued.

There is such a great support system here. I thought it was just going to be this solo pursuit, kind of in a library with occasional contact with my advisor. It’s so much more open than that.

Adding a PhD in Sport Management to an educational background that includes an MBA and a master’s in Economics gives Johnson a well-rounded perspective in the world of finance and sports organizations.

Right now he is learning about the financing of sports arenas with Dr. Judith Grant Long, associate professor of Sport Management, which details the financial and operational side of running a stadium.

“I had a project where I was describing the financial terms of the agreement for the University of Louisville’s KFC Yum Center. I was looking at how they were financing the deal, how they were attempting to repay the bonds with expected revenues, and how the revenues weren’t meeting what the expectations were,” Johnson said. “So they had to refinance the deal to lower the payments and stretch out the amount of time they're paying and lower the interest rate.”

His ultimate goal after graduation is to become a professor of Sport Management either in a business school or within a kinesiology department or work in the front office of a professional or collegiate organization. He would also like to do some work in the area of financial consulting.

Johnson has been pleasantly surprised by how accommodating the faculty have been. He said that every faculty member he has spoken with has been in his corner, asking him questions beyond academics to get to know him better and making sure he is succeeding in the program.

“There is such a great support system here. I thought it was just going to be this solo pursuit, kind of in a library with occasional contact with my advisor,” Johnson said. “It’s so much more open than that. I can’t wait until conditions change, public health-wise, so I can get more connected.”