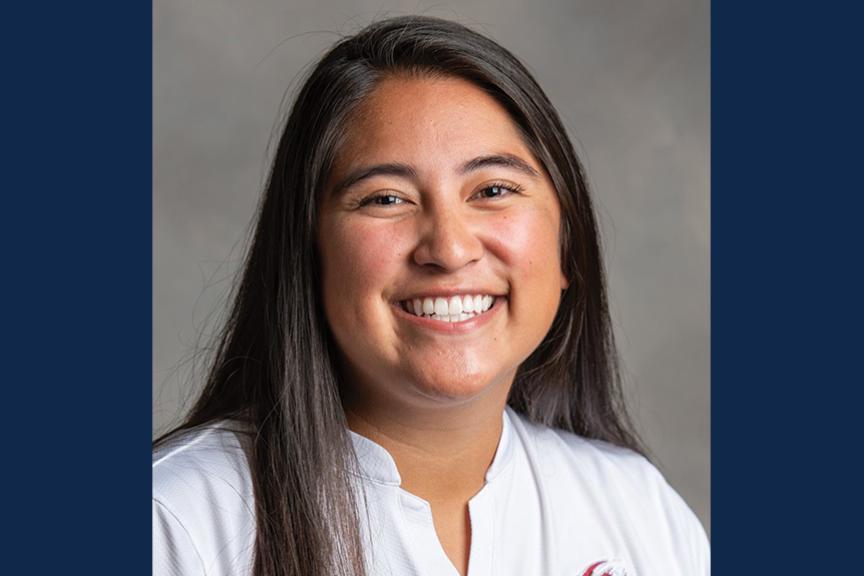 While watching games with her uncle, she realized that basketball is more than just a physical game of running faster and jumping higher than an opponent. It’s a “delicate dance” between speed, agility, and prediction.

“We just hit it off. It was one of those things where I was like, ‘[My athletic trainer] really cares about me. She is making me better, and how do I do that? How can I be the person sitting on the stool instead of on the table?’” said Sondakh-Dorantes.

“I flew out to North Carolina and fell in love with the area and school,” she said.

Sondakh-Dorantes started working with Elon’s soccer and lacrosse programs before switching to men’s basketball this past summer.

“Who doesn’t love being on the sideline of a game and helping an athlete go back to doing what they love,” she said. “I got a chance to be rewarded myself, and I wanted to do that for other people.”

Growing up in Saline, MI, Sondakh-Dorantes’s heart was always set on coming to U-M. However, the rule in her house was that she had to leave the state of Michigan for at least one year of college. She transferred to U-M after spending her first year at Bowling Green State University. Sondakh-Dorantes was initially worried about her transition to U-M because she didn’t know anyone in her Athletic Training cohort. However, the smaller classes made it possible for her to connect with people.

“The classroom size and our instructors’ availability and approachability were helpful for me,” explained Sondakh-Dorantes. “Instructors knew you more than just an attendance number…you could tell they enjoyed what they were doing and were passionate about it. It was nice to call Kinesiology home.” She remembers explicitly all the impactful conversations she had with La’Joya Orr, managing director of recruitment and admissions, about school and life. Sondakh-Dorantes called Orr “her rock” during her four years at U-M.

“I felt cared for in that environment. You take classes, and it’s nice to have people on the other end who care about you when you’re away from home,” she said.

Instructors knew you more than just an attendance number…you could tell they enjoyed what they were doing and were passionate about it. It was nice to call Kinesiology home.

Basketball was always Sondakh-Dorantes’s focus during her time in Kinesiology. She remembers having conversations with Brian Czajka, clinical assistant professor of Athletic Training and director of the Athletic Training Education Program, about working in sports she wouldn’t get bored watching.

During her senior year, Sondakh-Dorantes’s was fortunate to work with the U-M men’s basketball team that made it to the NCAA championship game against Villanova. That experience gave her confidence that she made the right career decision.

After graduation, Sondakh-Dorantes attended Concordia University Wisconsin for her master’s program. She was able to work at the university’s Ann Arbor location as a graduate assistant athletic trainer, completing rotations in football, baseball, cheer, and dance. Concordia’s close proximity to U-M’s campus allowed her to stay in touch with the connections she made through Kinesiology’s Athletic Training program.

Over the years, Sondakh-Dorantes feels blessed by those who have helped mentor her along the way. From friends to family, mentors, and teams she has worked with, they have all helped shape her into the athletic trainer she has become. Through their support and encouragement she has gotten the chance to continue to pursue her dream.

Her most loyal support system: her uncle.

“He became my biggest fan when I went into athletic training and would cheer me on just as much as he did for the team,” Sondakh-Dorantes said. “To be able to work in basketball as a job, it’s a dream come true!”