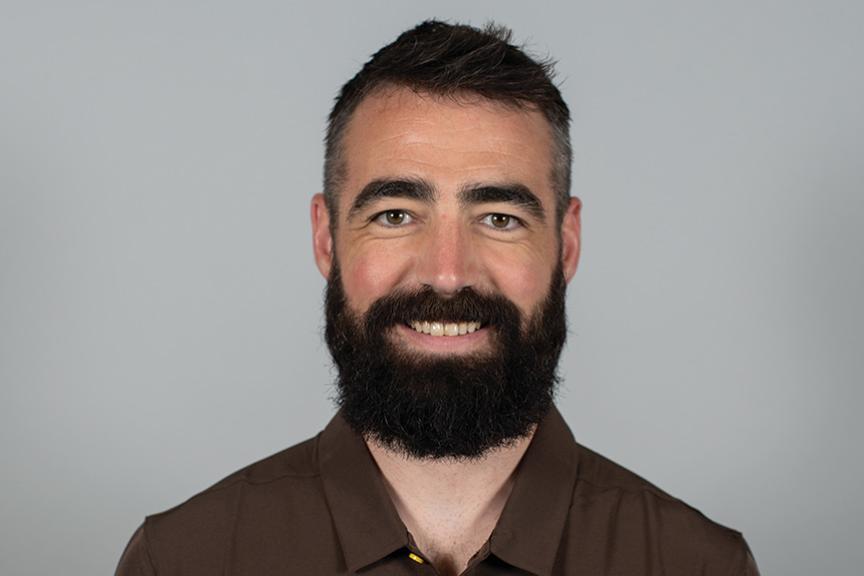 Paul Porter (AT ‘10) knew in high school that he wanted a career in sports. The Michigan Athletic Training program helped get him one.

As the San Diego Padres minor league athletic training coordinator, Porter travels around the country and oversees the medical and health needs of the Padres’ minor league players. The Padres have teams in El Paso, Texas; San Antonio, Texas; Fort Wayne, Indiana; Lake Elsinore, California; Peoria, Arizona; and the Dominican Republic. The Padres also have a training facility in Arizona.

While he describes his role as an 80/20 split between leadership and treatment duties, Porter’s favorite part about his job is helping the athletes. “Once we identify the source, we use manual therapy and corrective exercises to help them get off the table and back to their craft,” he said.

Porter credits his diverse clinical rotation experiences in preparing him for his job. While at Michigan, he embedded with U-M football (twice), men’s and women’s gymnastics, women’s crew, women’s tennis, and women’s soccer. He finds himself applying different techniques he learned from each sport every day. He recalled one player being amazed that Porter could incorporate a wrist-wrapping technique from tennis into baseball.

“The athletic training team at Michigan is one of the largest and most diverse in terms of skill set and experience in the country,” Porter said. “I knew I was going to get a great education. It was the clinical experiences where I had the most on-the-job training and gained a variety of exposures to different techniques.”

One role his education didn’t prepare him for was serving as the Padres’ infection control and prevention coordinator during the height of the COVID-19 pandemic.

Porter thought it would be a simple two- or three-week break when everything first shut down in March 2020. Of course, it wasn’t that short or straightforward. He had weekly Zoom calls with Major League Baseball to stay updated on the negotiation process with the MLB Players’ Associations and the progression of the league’s health and safety protocols. Once the MLB and MLBPA agreed to resume play in June 2020, everything shifted into overdrive.

Porter dug through the league’s 120-page health and safety manual to figure out how to implement it in a stadium he was unfamiliar with.

“I was living in Arizona, where our spring training complex is, when [management] asked me to take on this role. I hadn’t set foot in Petco Park before, having been new with the team and with the pandemic, so it was a lot of learning on the job,” he said.

He said the little things he learned at Michigan—being calm under pressure, thinking clearly, working with teammates—helped him through that first month.

Attending U-M was always Porter’s dream. His mother was an alum and he had a lot of family in Michigan, especially the Ann Arbor area. Growing up in England, he had the opportunity to come to the US during the summer as a teenager to shadow some of his aunt’s physical therapy colleagues at Chelsea Community Hospital. Those experiences sealed his decision to apply to U-M and the School of Kinesiology.

However, Porter didn’t know what athletic training was until he went to his Kinesiology orientation session. He remembers watching tennis on television as a kid, and the commentators would talk about the athletic trainers (called “physiotherapists” in England) when they ran onto the court. When reviewing his degree options, he thought athletic training “sounded like lifting weights,” so he enrolled as a physical education major.

“It wasn’t until orientation where they went over athletic training in-depth I was like, ‘That is what I want to do,’” Porter said. “We then go around the room and introduce ourselves, and I raise my hand and say I’m in the Athletic Training program. Afterward, they pulled me aside and asked if I wanted to switch from PE to Athletic Training. I said yes, and they go, ‘Okay, we’ll help you out.’”

The memories and friendships Porter made at Michigan will last a lifetime. He attended a classmate’s wedding in Idaho over the summer, and they spent the entire time reflecting on their experiences.

One of Porter’s favorite memories is the 2007 Michigan vs. Ohio State football game. He was running down the tunnel at Michigan Stadium with quarterback Chad Henne, who was returning from an injury. “I remember hearing the crowd roar as we appeared from the tunnel. Instead of turning right to have a free path to the Michigan sideline, Chad chose to run left directly through the entire Ohio State team, including the band, to get back to our friendly sideline with me in tow. It spoke to the competitor he was,” he said.

After graduation, Porter interned with the Detroit Lions for a year before attending Louisiana State University for his master’s degree. He then worked as an athletic trainer in the Arizona Diamondbacks minor league system. Two years later, he was promoted to assistant minor league medical coordinator. Over the next five years, he would return as an athletic trainer at the Diamondbacks AAA affiliate before returning as the assistant minor league medical coordinator. He joined the Padres organization in January 2020.

Porter’s advice for new graduates is simple: be patient, be hungry, and ask your clinical instructors lots of questions. He added that the hours put in doing the little things will help you reap the rewards later.

“Athletic training is not always the most glamorous of jobs. You will need to work hard and leave your ego at the door. As you learn and grow as an athletic trainer and gain the trust of your clinical supervisors, you will be able to do more and have a more hands-on, inclusive experience,” Porter said.

The athletic training team at Michigan is one of the largest and most diverse in terms of skill set and experience in the country. I knew I was going to get a great education. It was the clinical experiences where I had the most on-the-job training and gained a variety of exposures to different techniques.