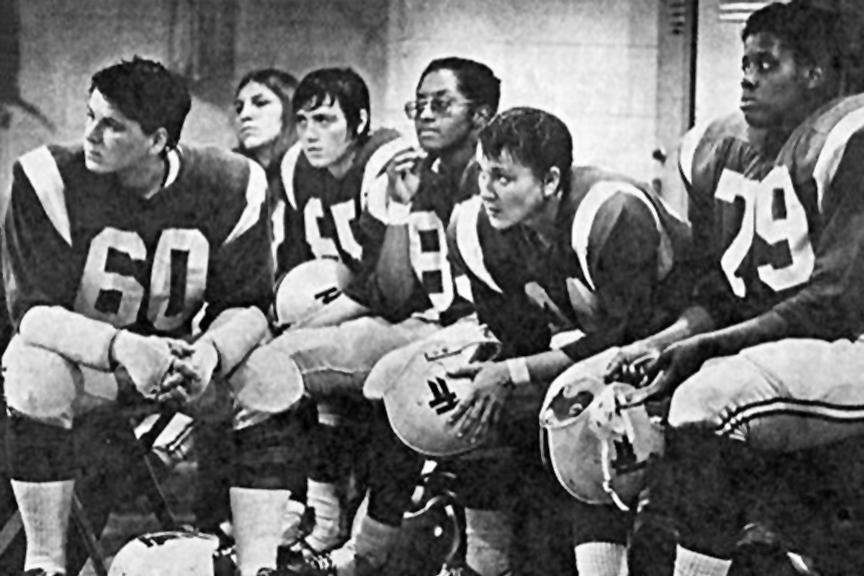 Note: This story was originally published in September 2015, and written by Kim Kunoff.

While Title IX was just being passed into law, the Toledo Troopers – a women's professional tackle football team – were in the midst of winning six straight National Women's Football League World Championship titles. In July 2014, alumna Nancy "Eric" Erickson (PE '66), along with her Troopers teammates, was enshrined into the Women's Football Foundation Hall of Fame.

The Troopers' impact on women's sports is often overlooked, and women's tackle football is still taken less seriously than men's (Lingerie League?). The aura of farce around the game is just what The Troopers fought to dispel. Women’s semipro football was formed in the mid-'60s as a gimmick by talent agent Sid Friedman. By the mid-'70s, when Erickson was playing with the Troopers (#60, far left in the photo above), Friedman's Women's Professional Football League had given way to the more legitimate National Women’s Football League, the charter lineup of which the Troopers were a part.

Erickson came to the game later, at the age of 35. She had played baseball and softball her entire life, and heard about the Trooper tryouts through a softball teammate in Ann Arbor. Football had always held a fascination for her, but had been inaccessible until now. "It was the one sport that I had not had an opportunity to play as I was growing up," she said. "I was 35 years old and I knew it was going to be my last chance, so I decided I would play."

"I made the cut. I was 5'3", weighed 135 pounds," recalls Erickson. When the starting right guard was injured, the coach put Eric in. During her first game as guard, she found herself across from a 6'1", 267-pound woman, and knew she was out of her league.

So Eric strategized. She used her pull at the university's athletic shoe repair shop, which she had been managing since graduation, to get to U-M Head Football Coach Bo Schembechler. "He said, 'Come a half an hour early for practice. I'll let the guys show you something.' I did. I went over and they showed me a club crab lock."

It worked. "'Where did you learn that?' the Troopers' coach asked. I said, 'I went to practice. Bo showed me how, Bo and the boys.' He said, 'Do you know Schembechler?' I said, 'Yeah.'"

[Football] was the one sport that I had not had an opportunity to play as I was growing up. I was 35 years old and I knew it was going to be my last chance, so I decided I would play.

While Eric was driving to Toledo for football practice and breaking sports gender barriers, her lifestyle was not institutionally supported. "It's amazing, not only the social change but the change within people. The girl that I moved here with, was so afraid of somebody finding out that she hardly went out of the house most of the time," she remembers. "You didn't go to bars, you went to somebody's house, but women couldn't buy houses. You had to have mommy and daddy sign because women couldn't afford to have a house. … Mommy and daddy signed [laughs]. Everybody was afraid."

Following her year with The Troopers, Erickson moved to Florida to work as the recreation director for DeSoto County, where she started the state's first integrated girls' junior high softball team.

She credits her own experiences as a gay woman athlete for shaping her resolve to help others attain their goals. "That's why, I think, we helped other people, because a lot of people don't know where to start to help themselves. If you point them in the right direction they will. If they really have the desire and the ability they will find their way and they do."

The documentary We Are the Troopers will begin showing at film festivals nationwide this spring. Watch the trailer.

We Are the Troopers: The Women of the Winningest Team in Pro Football History will be published this fall. Learn more.