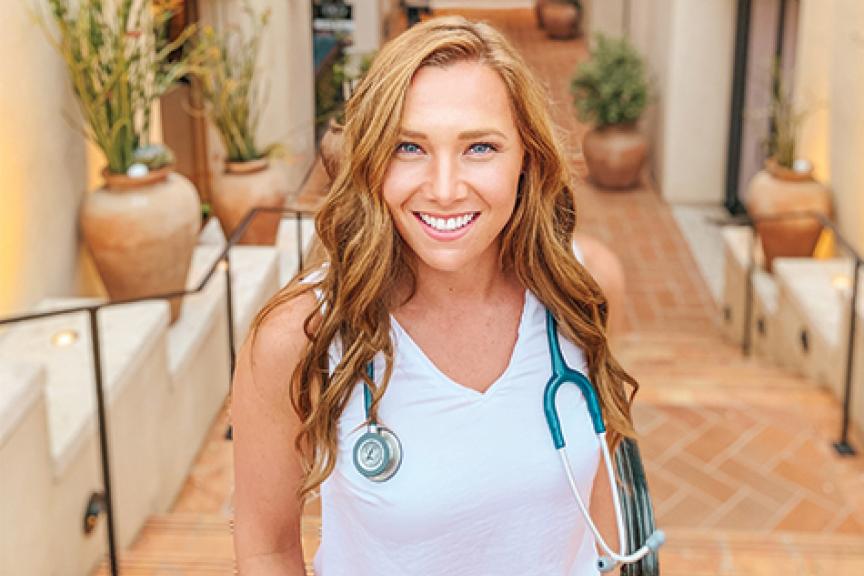 Tell us about what you have done since you graduated.

The day after graduation, I packed my car and moved to Austin, TX, to work for National Neuromonitoring. I worked as an intraoperative neuromonitorist with National for two years and took on several other roles, including education and business development, within the company. During that time, I also obtained my master's in Adult Education from Penn State University -- World Campus. I knew deep-down that I wanted to fulfill my goal of opening a holistic wellness center and clinic, so I applied to Naturopathic Medical School at Bastyr University. Upon acceptance, my fiance and I sold our house in Austin and prepared for the cross-country move to San Diego. This past June I started the Naturopathic Medical Doctor (NMD) program and decided that I wanted to learn Eastern Medicine as well. I applied to Pacific College of Oriental Medicine here in San Diego for the doctorate in Chinese Medicine & Acupuncture. Upon acceptance this fall, I was dual enrolled in both medical doctorate programs.

I could not have had the same success in the IONM field if it was not for Michigan's rigorous program. The level of didactic and clinical training is unparalleled and that was evident when entering the workforce and when taking the licensing exam.

Tell us a bit about your experience in the Movement Science and IONM programs.

My sophomore year I transferred from LSA to Kinesiology and it was the best decision I made at Michigan! I decided that I wanted to study Intraoperative Neuromonitoring (IONM) and Movement Science. To me, the IONM program was the first time I felt like home at U-M. The community and relationships that were formed through the small class sizes were lifelong; one of my classmates is even in my wedding next summer! The IONM program was challenging, but absolutely thrilling at the same time. Without a doubt, I'd choose IONM again.

In your opinion, what's the best part of the program?

The friendships and comradery that I formed with colleagues in the IONM program was extremely meaningful. At the same time, the application of what we learned in the IONM program directly related to a stable and high-paying career right after graduation, which was invaluable at the time.

What would you like prospective students to know about the program?

IONM is an incredible path that, in my opinion, leaves you with the most experience and knowledge compared to any of the other healthcare related undergraduate degrees. For some, myself included, IONM was a stable career until I narrowed down exactly what I wanted to do in the medical field.

How has your Kinesiology degree contributed to your success?

Without a doubt, I could not have had the same success in the IONM field if it was not for Michigan's rigorous program. [Program director] Josh Mergos was instrumental in preparing us to be very competent in the field of IONM. The level of didactic and clinical training is unparalleled and that was evident when entering the workforce and when taking the licensing exam. In terms of being in medical school now, I feel extremely prepared for the clinical setting. Not only do I have a great science foundation in Movement Science and neurology from IONM, but I also have interpersonal skills from communicating with patients and educating them about IONM in pre-op before going into surgery.