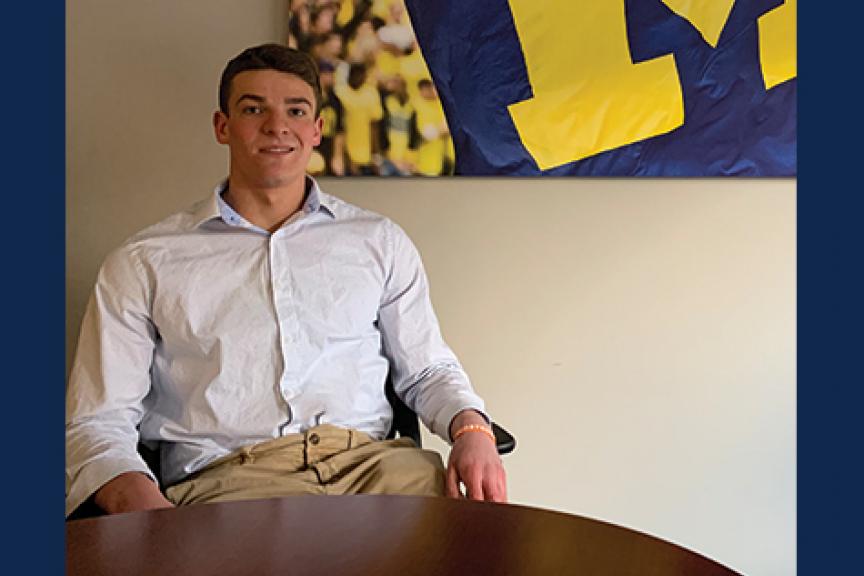 Applied Exercise Science Junior Mitchell Siegel helped the next wave of National Basketball Association talent prepare for the biggest night of their lives during an internship this past summer.

He worked with the NBA clients of Priority Sports, a Chicago-based sports agency, during their NBA Draft Combine pre-draft workouts. The NBA Draft Combine is a multi-day event before the annual June NBA Draft. At the Combine, college basketball players are interviewed, perform various medical and athletic tests and shooting drills, and play in scrimmages for an audience of NBA coaches, general managers, and scouts.

“Basically, I was training them and helping them prepare,” Mitchell said. “I was rebounding for them, counting up their shots, helping them with stretching, ice baths, and things like that. It was hands-on and a great opportunity.” Mitchell was looking for an internship in Chicago, his hometown, when a childhood friend suggested this opportunity to him. He was able to take his AES classroom knowledge and directly apply it to his daily tasks. That included things like “knowing how to spot the players on weights, and knowing I’m confident enough to tell them this isn’t the best way to do it,” he said. He recalled a time when a player asked him for advice on icing an injured muscle before a workout. Mitchell told him to ice it afterwards because it was not beneficial for the muscle to be cold during a workout.

It’s one of the top three schools for kinesiology. It’s hard to turn that down. I love the work hard, play hard mentality that I’ve noticed on campus.

One of Mitchell’s favorite experiences was working the NBA Draft Combine, which was held at the gym used by Priority Sports clients. He was invited by the gym’s general manager after seeing how well he worked with athletes during their individual workouts. Next summer he is looking to expand upon his internship with Priority Sports and work on the administrative side in the marketing department.

Mitchell has always been into exercise and athletics, especially basketball. He made his high school team, but his team’s strength coach told him he needed to add some muscle if he wanted to play at a higher level.

From there, a lightbulb clicked and Mitchell became interested in studying how exercise affects the body. “I got really interested in questions like ‘What’s going on inside? Why is my coach telling me to eat protein?’ The whys really made me interested in pursuing [AES],” he said.

Mitchell’s decision ultimately came down to the research he did on the School of Kinesiology. “It’s one of the top three schools for kinesiology. It’s hard to turn that down,” he said. “And I love the work hard, play hard mentality that I’ve noticed on campus.”