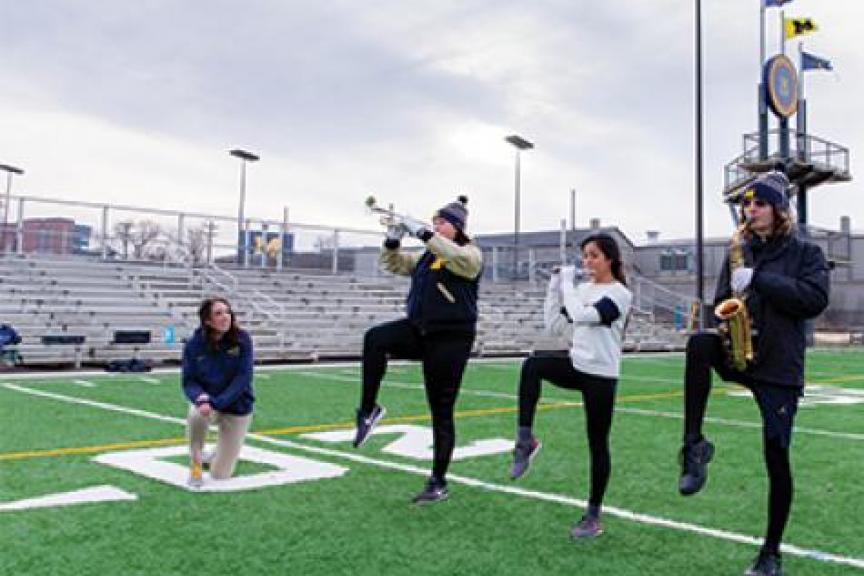 One could argue that junior Megan Willison’s collegiate decision was a foregone conclusion.

Maize and blue is in her DNA. She tells her friends stories about hearing “The Victors” in the delivery room and spending countless Saturdays making the two-hour drive from her family’s home in Grand Rapids to cheer on the U-M football team and watch the marching band perform.

It came as no surprise Megan said yes upon opening her U-M acceptance letter. Her goal: graduate with an Athletic Training degree from the School of Kinesiology.

“Michigan has a great program with so many great opportunities, it just made perfect sense,” she said.

While the decision to attend U-M was straightforward, Athletic Training was something Megan stumbled into. She wanted a career in medicine, but she didn’t know if medical school was right for her. It wasn’t until she spent a week shadowing her uncle’s physical therapy clinic that it clicked. “I started to look into Athletic Training more and it seemed really interesting because I’ve been involved in sports my whole life,” she said.

“I thought I generally knew what the major was like when I got here, but as I started taking classes, learning more about it, I just fell in love with it,” she continued. The smaller classes appeal to Megan, allowing her to build a tight-knit community with her classmates.

She also enjoys the practical experience gained through labs and rotations with U-M athletic teams. Megan has worked with the women’s field hockey and men’s gymnastics teams and spent this past semester working at Pioneer High School and Probility Physical Therapy in Ann Arbor. Next semester she will be working with the football team.

“The athletic trainers that work with those sports are really great about teaching us different things, like the logistics of what Athletic Training is like outside of a textbook, and giving us the opportunity to apply different things we’re learning in class,” Megan said.

Megan is also passionate about music. She comes from a band family -- her dad is a Michigan Marching Band (MMB) alum, her older sister is currently a senior in MMB, and her younger sister is in Notre Dame’s marching band. Her other younger siblings also play instruments.

The athletic trainers that work with those sports are really great about teaching us different things, like the logistics of what Athletic Training is like outside of a textbook, and giving us the opportunity to apply different things we’re learning in class.

“Music was always a part of my childhood,” she said. “We love listening together, supporting each other and the different ensembles and concerts we’re in.”

Megan, who plays the saxophone like her father, participated in her high school’s marching band and spent her first year at U-M in MMB  before having to quit due to her academic schedule.

Her decision was “gut-wrenching,” but she found a way to stay connected to an experience that has been a huge part of her life. Megan had an idea for a research study about preventing and treating injuries related to MMB’s long practice hours.

“I always knew marching band was similar to athletic activity. If you look at their pre-game marching, it takes a lot of skill to do that, and I noticed my peers starting to have injuries that were a result of marching. Wearing knee braces, ankle braces, that sort of thing,” she said.

Megan remembered her sister suffering a marching band injury during her first year.

“With an Athletic Training background and interest, I started to think if there are all these injury prevention methods for different sports teams, why wasn’t there anything for marching band?”

Megan discovered that only six studies have focused on marching band specific injuries, including a 1993 U-M study published in the Journal of the American Podiatric Medical Association. According to the study, 153 of the 179 injuries suffered during the season were deemed lower extremity, mainly pertaining to foot, ankle, or knee injuries.

Megan approached Athletic Training Clinical Assistant Professor Brian Czajka, who agreed to be her faculty mentor. They developed a survey pertaining to band activity injuries. “It goes into specifics about how they were injured, what type of marching they were doing while they were injured, and different kinds of treatment they got for it,” she said.

Megan said about half of MMB members signed up to participate in the study, which runs through the end of the year to coincide with the season. Once she is through with her research, Megan wants to submit her information to the marching band for their benefit.

“Megan’s research will certainly be a helpful addition to the field of marching and pageantry arts,” MMB Director John Pasquale said. “We continually look for ways to improve methods to provide the safest possible experiences for our student performers.”

In addition to her classes and research, Megan stays busy through extra-curricular activities. The sound of her saxophone can be heard during Michigan basketball games and at different concert halls on campus. She is a member of Tau Beta Sigma, the national honorary band sorority, where she has worked to create a wellness committee to perform acts of service for the different campus bands. Megan also participates in the Organization of Athletic Training Students (OATS) and Athletes in Action.