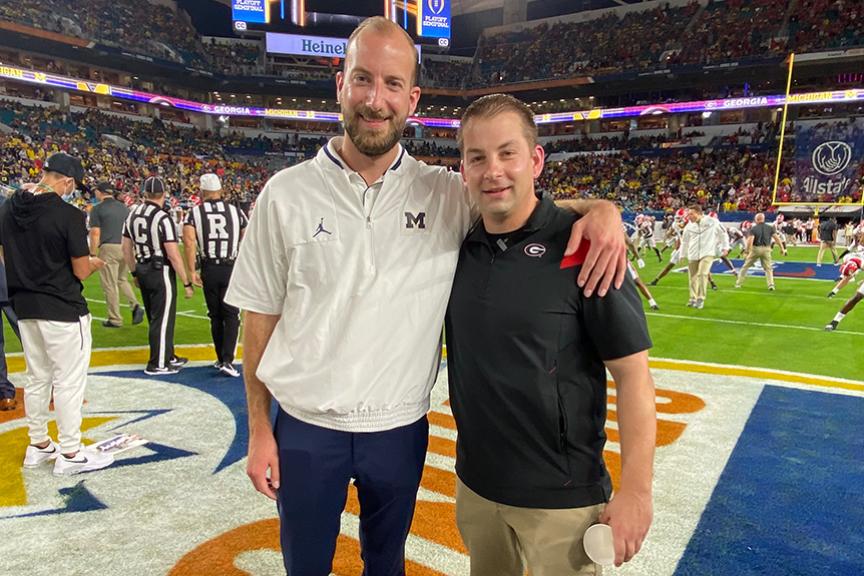 Note: This story was written before the College Football Playoff on December 31, 2021.

Now, the matchup against Georgia hits close to home for Michigan Football athletic trainer Jason Williams (AT ‘12). It’s an opportunity to work opposite his friend and fellow 2012 Athletic Training graduate Drew Willson.

Willson has been an athletic trainer for the University of Georgia football team since 2015.

“We knew there was a chance we could meet in the College Football Playoff once we got into November and saw how things were beginning to line up,” Williams said. “Drew and I were senior students in 2011, and while we have gone on different paths to different universities and programs, it will be neat to be on the same field together.”

“There is no other team that I’d like to see have success besides the University of Georgia than the University of Michigan. It’s going to be a fun matchup,” he said. “I have a strong friendship with Jason and some of the other staff members there at Michigan. I enjoyed my time there as a student, and it helped me get where I am today, but, I got this ‘G’ on my chest, and I’m 100% committed to Georgia going into the game.”

Following graduation, Willson completed a graduate assistant position and his master’s degree in Exercise and Sport Science at the University of Utah. After working as a high school athletic trainer, he took a year-long internship at Northwestern University with the women’s cross country team and volunteered with Northwestern’s football team.

In June 2015, he joined the Georgia Football staff.

In our profession, athletic training relationships – who you know, and who you network with – is very important. Even as students, [U-M] provided us a great network for learning and getting to meet new people in the state and across the country.

Both Williams and Willson started their clinical rotations as sophomores with the football and men’s basketball teams, and ended as seniors with the men’s and women’s track and field teams. They each had a variety of other clinical experiences in between.

“The knowledge base I was able to establish and learn in Ann Arbor prepared me for this career and allowed me to be successful moving forward,” Willson said. “A variety of topics were covered in our three years in the athletic training program, and I felt prepared to take the certification exam.”

“Working alongside other disciplines and other academic focuses, or learning to look at certain strategies, problems, and solutions outside of our academic area, helped both of us when it came to different lab experiences, clinical experiences, and projects,” Williams said.  “It’s a much bigger world out there than our world, and we can learn from so many other interdisciplinary areas to not only help us but to help others as well.”

Williams added the biggest growth for an athletic trainer is during their first year following graduation. He said athletic trainers go from being told what to do to managing students while creating their own personal philosophy.

Williams and Willson are in constant communication with each other throughout the season, discussing emerging topics and technology in sports medicine, professional development opportunities, advice for dealing with football injuries, and, in the case of this season, some good old fashioned back-and-forth banter.

In addition to treating athletes, Williams and Willson also oversee student clinical rotations. Williams said he sees six to eight students every semester and is quick to tell them their rotations will challenge them. However, he adds that while rotations can be demanding, there isn’t a better reward for students than seeing their academic work pay off in a clinical setting.

“You’re going to get what you put into it,” Willson said. “There’s going to be long hours, and especially here in Georgia, it’s going to be hot out at practice, but if you’re able to get past that and look at what you want to get out of it, then usually you will do well.”

They both said they could feel U-M’s influence throughout their journeys.  Willson said one of U-M’s football athletic trainers helped him land his job at Utah and had connections with Willson’s current boss.

“In our profession, athletic training relationships – who you know, and who you network with – is very important. That is one thing U-M does a great job of,” Willson said. “Even as students, they provided us a great network for learning and getting to meet new people in the state and across the country.”