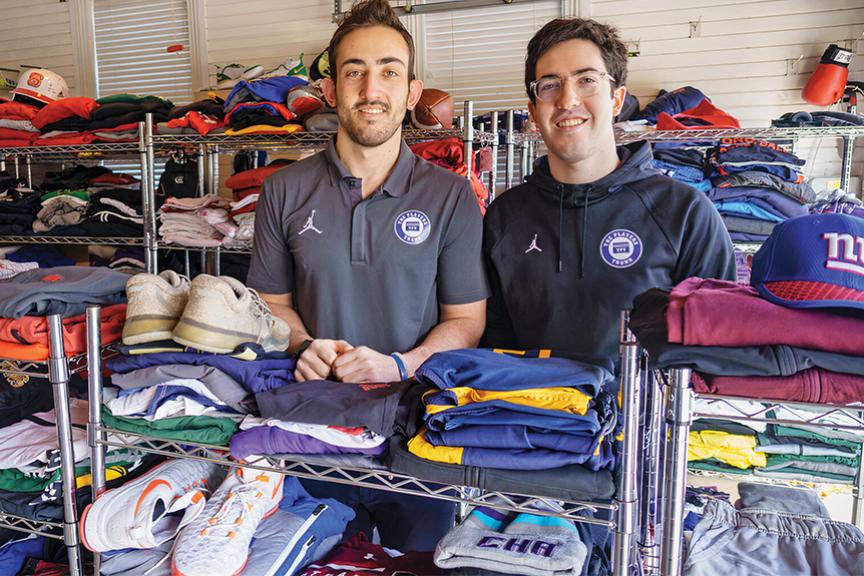 Jason Lansing (SM ‘21) and Austin Pomerantz (SM ‘21) are the co-founders of The Players Trunk, an online store that gives college athletes a platform to monetize game-worn gear, collectibles, merchandise, and even personal experiences.

Lansing and Pomerantz started The Players Trunk with former University of Michigan Men’s Basketball team members Charles Matthews and Zavier Simpson to help them sell their game and practice jerseys, shorts, and footwear. They previously tried to sell the gear on Instagram, but found the process cumbersome and ineffective.

Fast-forward to July 2020, when Lansing and Pomerantz realized they could turn their side gig into a legitimate business.

“We didn’t want to be the kids who were just binging Netflix shows or playing Fortnite all day during the pandemic. We wanted to do something meaningful and productive,” Pomerantz said.

“We’ve always had a strong passion for sports, and as game managers we loved working with the team and forming relationships with the athletes,” Lansing added. “There was no better way to combine all those passions and relationships into one thing.”

Lansing and Pomerantz, who were both equipment managers for the Michigan Men’s Basketball team, used  their connections and relationships with U-M athletes to build their inventory. They partnered with Matthews and Simpson, who helped them source and get in touch with athletes around the country.

Athletes send items to Lansing and Pomerantz, who then catalog it, take photos, upload to the website, and ship it after purchase. Lansing said the goal is to take the hassle away from the athlete.

“They’re not going to want to go to the post office every day and deal with tracking numbers and payments, so we do all that for them,” he said.

“As we’ve gone along and with the name, image, and likeness [NIL] law passing, we have continued to grow and create things that might not be an athlete’s original gear, like different autographed stuff and different experiences a customer can buy,” Pomerantz said.

He added the NIL Law will allow current college athletes to monetize some of their own big sporting moments. He recalled talking to a current U-M student-athlete who said the decision to come back to school and play for another year was due to the NIL rule change.

I came from a small public high school and Michigan felt big to me, but when I went through the Sport Management program, it felt like family and made U-M smaller.

Their business has quickly grown to include players from the Power Five conferences (Atlantic Coast Conference, Big Ten, Big 12, Pac-12, and Southeastern Conference) and the American, Big East, and Mid-American conferences. They have also expanded into baseball, volleyball, and football, including some items from players in Major League Baseball, the National Basketball Association, and the National Football League.

Both Lansing and Pomerantz said their Sport Management degree prepared them to hit the ground running on this business venture.

For Lansing, his education gave him the knowledge and confidence to effectively communicate when working with athletes, agents, and lawyers, whether in pitch meetings or negotiations. One class that stood out to him was SM 317: Career Planning with lecturer Kelli Donahue. The class structure allowed Lansing to tailor assignments to what he and Pomerantz were working on with The Players Trunk.

“We had to do a presentation in SM 317, and I did mine on preparing for this NIL situation. I did the case study and had the slide deck ready to go, so when July 1st hit, Jason and I were ready to go pitch athletes,” Pomerantz said. “We were sending Zoom links and getting guys on board and onto the platform right away. We were able to accomplish all this because Professor Donahue worked with us and gave us the freedom to incorporate The Players Trunk into the classwork we did,” Pomerantz said.

He added the best part about the program is the lasting connections you can make.

“We were able to get an article written in Boardroom about us because I had a friend who was interning there,” Pomerantz said. “I came from a small public high school and Michigan felt big to me, but when I went through the Sport Management program, it felt like family and made U-M smaller.”

You can find The Players Trunk online at theplayerstrunk.com.