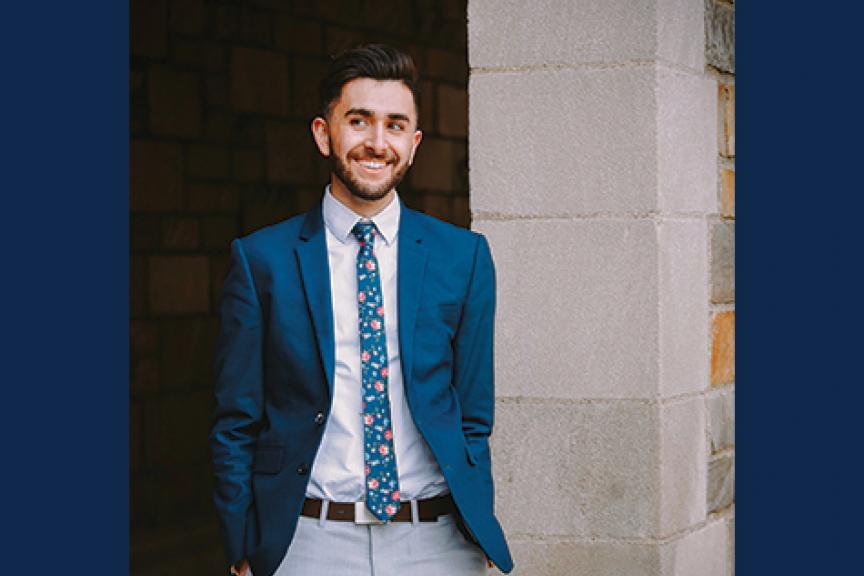 It wasn’t the end to his senior year Grant Floto expected or wanted.

Grant, a Sport Management major, found his last semester at U-M cut short due to the COVID-19 pandemic. He was forced to move out of his dorm, quit his job as a residence advisor, and say goodbye to his friends before moving back to his home in Byron, MI.

One area he didn’t have to forgo was his job with U-M Social, where he worked during his senior year as a content specialist and photographer. As soon as Grant found out graduation was postponed, he wanted to find another way to honor graduating seniors. Since he had been running U-M’s Instagram account, he came up with an idea of profiling seniors and including a short caption. He pitched his idea to Nikki Sunstrum, U-M’s director of social media and public engagement, and together they launched the #Victors2020 senior photo project. (See it at myumi.ch/Ww5bA).

Each day in April, Grant posted a photo of a senior on the U-M Instagram account, accompanied by a word that represented their time at U-M. The last post on May 1 combined all 30 words.

“I don’t think I would have been at the NBA or have my dream job at the NFL if it weren’t for all the opportunities that U-M has given me,” he said. “I think that comes from the different people that I’ve met, the different classes I’ve had, the school communities, the Sport Management program, and all those sorts of things that have really opened so many doors for me.”

In August, Grant – a lifelong football fan – will begin working at the NFL’s world headquarters in New York City and rotate throughout four different departments over the course of two years.

He said his experiences in the Sport Management program helped prepare him for the NFL.

“From learning sport marketing, law, and economics, and having so many group projects and hands-on experiences in Sport Management – that’s something that a lot of other students at schools across the country and even at U-M don’t have,” Grant explained. “It helped a lot for the interview process. I knew how to talk about my experiences in the program and I think those really shone in the eyes of the NFL.”

The summer between his junior and senior year, Grant interned at the NBA, where he was a diversity and inclusion intern working on community relations events, marketing campaigns, and research and database analytics.

The year before, he interned with NASCAR doing marketing and communications as part of their diversity internship program.

I don’t think I would have been at the NBA or have my dream job at the NFL if it weren’t for all the opportunities that U-M has given me. I think that comes from the different people that I’ve met, the different classes I’ve had, the school communities, the Sport Management program, and all those sorts of things that have really opened so many doors for me.

Grant thought back on his time in Kinesiology and said the school’s most unique aspect is a student’s ability to make personal connections with professors.

“Going from my high school, which had 400 kids total, and then to the University of Michigan was a huge transition. But Kines felt like it was family, a really close-knit community,” he explained.

He was able to connect with Adriana Phelan (lecturer), Stacy-Lynn Sant (assistant professor), and Ron Wade (clinical assistant professor), who all encouraged Grant to step outside his comfort zone. They helped give him the confidence to realize he belonged at U-M and to hone in on his interests.

“Kines just has that ability to make U-M really small and the professors are more than willing to help out any student and to really be a mentor and resource to them on a personal level,” Grant said. “Whether that’s career advancement, internships, or academics, I think that’s something that really helped me.”

For now, Grant is connecting with his friends over FaceTime and text messages, reminiscing about favorite memories, including taking photos at football and basketball games, living on the Hill for all four years, and most of all, completing his Sport Management degree.

He would tell the incoming class to embrace being comfortable in uncomfortable situations. “It’s so competitive and everyone’s so ambitious, driven, and motivated,” he said. “You really need to break out of your shell and that’s something that’ll impact you in a positive way moving forward. If you can embrace those situations that might feel uncomfortable, your confidence will grow. You’ll be able to really prove yourself and to others what you’re capable of doing.”

Grant also encourages students to enjoy their time, have fun, and not take anything for granted.

“Appreciate it while it lasts, because it was the best four years of my life,” he said.