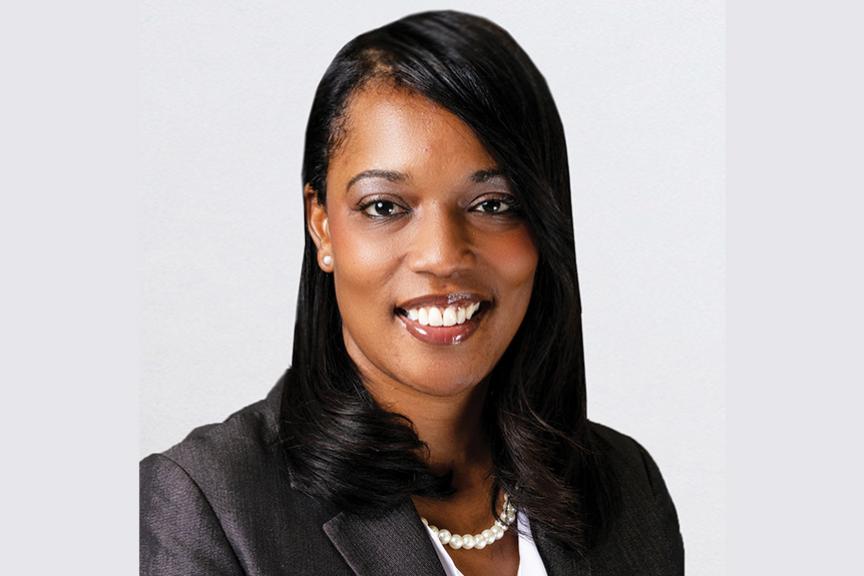 Dr. Monique Butler (MVS ‘97) draws a lot of inspiration from her mother, Theresa Mae Grant Roberts, who emphasized the importance of education, a healthy lifestyle, and extending love and grace to others.

Even though multiple sclerosis sapped her mom’s strength, Butler said she was still able to “share pearls of wisdom that would change our lives.” According to Butler, one of her mom’s favorite sayings was, “The biggest room in the house is the room for improvement.”

Butler has been advancing ever since. She moved up the ranks from an administrative physician at Detroit Medical Center (DMC) to become the chief medical officer of two DMC hospitals—the first woman to assume those roles. Butler also completed her Master of Business Administration degree during that time. After a year as chief operating officer at Children's Hospital in Michigan, she was then recruited to join HCA Healthcare as chief medical officer at one of HCA’s flagship hospitals in Denver, Colorado.

“Chief medical officers are responsible for recruiting the brightest and best physicians, ensuring that we're providing safe clinical care, and ensuring that there is a standard of excellence that physicians utilize while executing on fiscally-sound clinical operations,” she explained. “My focus is on ensuring that every patient and family that comes to us receives the highest standards of care possible and that this care is reliable, no matter the time of day or the doctor or nurse caring for them.”

Butler is also driven to give back. In honor of her mother, who passed away in 2007, Butler created the Grant Foundation to help improve health equity in the US. “We know that there is a shortage of primary care physicians across the nation, exacerbated even more by the [COVID-19] pandemic, and when we look at the number of underrepresented minority physicians, the shortage increases exponentially,” Butler explained. “The goal is to help individuals like myself, from humble beginnings, to be able to go to a university like Michigan and matriculate to medical school and become physicians.”

The Grant Foundation established the Pathfinders Scholarship Award to help first-generation and underrepresented Michigan Kinesiology students pursue a career in health care. Butler doesn’t want social determinants or socioeconomic status to stop students from completing their degree. She recalled that in college she had to work multiple jobs to earn gas money to attend class, and sometimes she would go hungry at night.

Butler’s scholarship isn’t the only impact she has made on the school. In her senior year of college, she became president of the Kinesiology Student Government (KSG), and her number-one priority was creating a career day and panel for students.

“I wanted to ensure that students understood the role kinesiology plays in society,” Butler said. “We invited organizations and graduate schools to participate in the inaugural career fair to showcase opportunities within this vast field.” Through her work on the Kinesiology Career Fair (which is still running 25 years later), Butler found a mentor and landed her first job in corporate wellness at Detroit Diesel Corporation. She completed the necessary post-baccalaureate classes for medical school while working full-time as a wellness specialist, teaching aerobic classes, smoking cessation, and ergonomics for the Roger Penske-owned company.

“Kinesiology gave me access to a healthy lifestyle that is a part of my life today,” Butler said. “In addition to being a very solid platform and undergraduate degree for medical school, studying kinesiology has helped me to understand the importance of wellness, fitness, and taking care of our bodies through preventative medicine.”

Butler always felt called to the medical field, but she also had a deep interest in nutrition and movement. As a teenager, she would help one of her Inkster High School (state-champion) basketball teammates, who suffered from asthma, after games. “When I look back on it now, I was sort of her sports doctor or personal trainer, and that’s when my interest in kinesiology and movement science became evident,” she said

Kinesiology gave me access to a healthy lifestyle that is a part of my life today. In addition to being a very solid platform and undergraduate degree for medical school, studying kinesiology has helped me to understand the importance of wellness, fitness, and taking care of our bodies through preventative medicine.

After medical school at Wayne State University, Butler decided to combine her medical and Movement Science degrees to become an internist focusing on nutrition, exercise physiology, and primary care. The combination of preventive medicine with allopathic medicine enabled her to care for her community holistically. Butler completed her residency at the Detroit Medical Center as a chief resident of internal medicine. She graduated from residency directly into an administrative leadership position as DMC’s medical director of corporate health promotions, a brand new department she built based on her background in kinesiology.

Butler has seen firsthand the impact her multifaceted knowledge has made on patients.

“It helped me stand out when I practiced medicine as a physician of wholeness and wellness,” she said. “I was talking with patients about the choices they made around food and activity before, for example, prescribing blood pressure medication.”

Butler said she wouldn’t have accomplished everything she has without everyone who helped her along the way. She specifically remembers thanking the medical school library’s janitor during her medical school graduation speech for leaving a light on so she could continue studying after the library closed.

This is why she’s passionate about mentoring the next generation of healthcare workers.

When Butler was in medical school, she and four of her Black classmates started Young Doctors of Detroit, a program for medical students to connect and mentor high school students from underrepresented populations who are interested in a career in medicine. The program is still in existence, and Butler said she has had eight physicians go through the program. “It doesn't sound like a large number, but to go from high school all the way through and finish medical school, is a long haul, and to have eight of them, knowing that they'll be able to go back to communities, is powerful and impactful,” she said.

Butler’s mentoring efforts extend into all aspects of healthcare. She started a six-week paid summer shadowing opportunity for underrepresented students when she was in Denver and is planning a similar internship in the North Florida Division. Butler is also working to create a program that assists HCA’s licensed practical nurses (LPNs) in becoming registered nurses (RNs). Program participants, most of whom are first-generation college students, will gain access to benefits and tuition reimbursements, and getting on the RN track helps elevate their communities. Additionally, Butler continues to mentor School of Kinesiology health science students.

No matter where she goes next, Butler will always be a Wolverine. She remembers driving to Ann Arbor with her husband every year to attend the university’s Martin Luther King, Jr. Day events. They would get to campus early, attend the keynote lecture, and then head to Knight’s for their famous chili. In 2021, the School of Kinesiology asked Butler to give the U-M Health Sciences MLK Day Keynote, “Where Do We Go From Here: Body Politics & Movement Towards Racial Empowerment.” It was a full-circle moment. “For me to be asked to keynote was amazing,” she said.