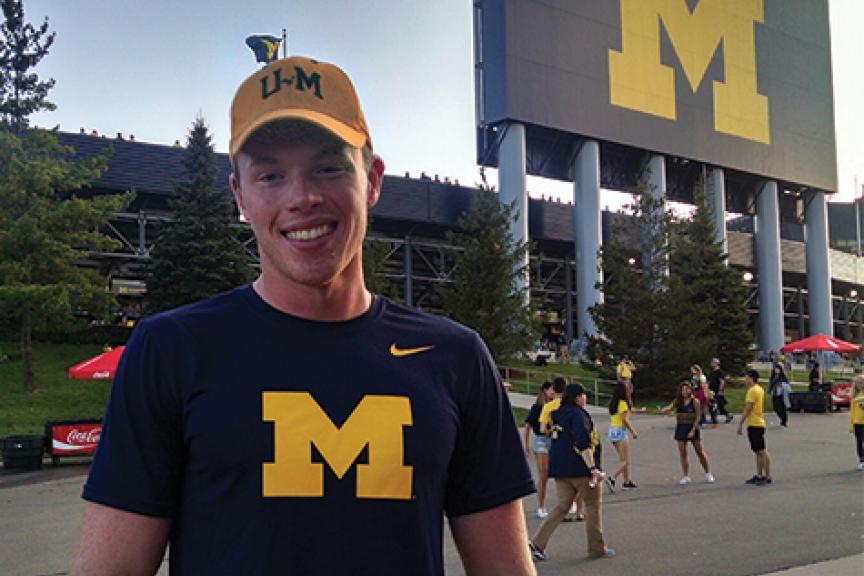 Adaptive sports give children with mobility disabilities the option to play physical sports like basketball, tennis, and football. However, most adaptive sports aren’t designed for competitive play.

New technology is changing that.

The iGym, an augmented reality game system developed by a team of U-M researchers, is giving kids the opportunity to play sports in a truly inclusive environment.

It uses two ceiling-mounted projectors to project a soccer-like field onto the floor. When players enter, an overhead computer vision camera detects each player and surrounds them with a “peri personal circle,” which they use to hit or kick, either with their legs or a tap of a button, a projected ball towards the other player’s goal.

A computer recognizes each action and uses the same kicking motion for all players. “If they’re doing the same action and scoring goals the same way, that all helps the inclusiveness of the project,” said Movement Science senior Dashiell Carichner, a member of the iGym research team.

The game can be played with up to three people per team.

“As soon as the kids get on the floor and see they can kick the ball and it bounces off corners and sides, they know they’re playing an interactive game, as opposed to sitting down and playing a video game,” Dashiell said.

Children with disabilities are often isolated and excluded because they don’t have enough opportunities to physically engage with other children, Dashiell continued. The iGym encourages children to interact with each other.

“It’s a setting where we can encourage each other and still try to beat each other,” he said.

The opportunity for exercise is an added bonus. “The whole thing not only provides social opportunities but also health and fitness activities,” he added.

Dashiell, who was born with mild cerebral palsy, wanted to share his experiences of not always being able to play with his brother, sister, and friends.

There are a bunch of opportunities here, especially with getting to work with other people who aren’t in college. You get in this mindset where everyone around you is in college and we all think and do things the same way. When you get into actual life, there are lots of different ideas coming from different ages.

Additionally, previous research piqued his interest in involving technology. He participated in a Michigan Association for Gifted Children's summer research program called Michigan Mentors. Dr. Susan Brown, UM associate professor of Kinesiology and director of the Motor Control Lab, organized the shadowing of Kinesiology graduate students. Dashiell saw how grad students used a Wii balance board attached to a computer to gather balance data in clinical assessments. He learned about hand dexterity experiments and even had a chance to try it out. Also, these studies explored ways to get kids more active in a classroom setting in an effort to reduce childhood obesity.

“It actually puts words into action. When you can see it for yourself, you get more experience than in the classroom,” Dashiell said. “It’s hard to teach something when you aren’t doing it. Students will gain a better perspective rather than having it on a piece of paper.”

Dashiell’s choice came down to U-M and Michigan State University’s College of Osteopathic Medicine. It wasn’t until he visited campus he solidified his decision.

His decision was very challenging, but he eventually decided on U-M because he thought the university offered more opportunities to work with the public.

“There are a bunch of opportunities here, especially with getting to work with other people who aren’t in college,” Dashiell said. “You get in this mindset where everyone around you is in college and we all think and do things the same way. When you get into actual life, there are lots of different ideas coming from different ages.”

The anatomy courses have been his favorite. He loves learning about what is happening inside the human body and knowing how human movements and actions are made. He also used skills gained from his scientific writing class on the award-winning iGym article that was published in the Annual Symposium on Computer-Human Interaction in Play (CHI PLAY ’19).

Dashiell said Kinesiology’s advising team was beneficial in helping him navigate his schedule. He said he came into college with the plan of just taking classes and graduating.

“The advisors have been the biggest part of me getting the confidence to come here, try in school every day, and be able to look at my end goal,” he explained. “They have taught me that it’s not just about getting out of here, it’s really about what’s next.”

Dashiell plans to enroll in an occupational therapy master’s program after graduation.