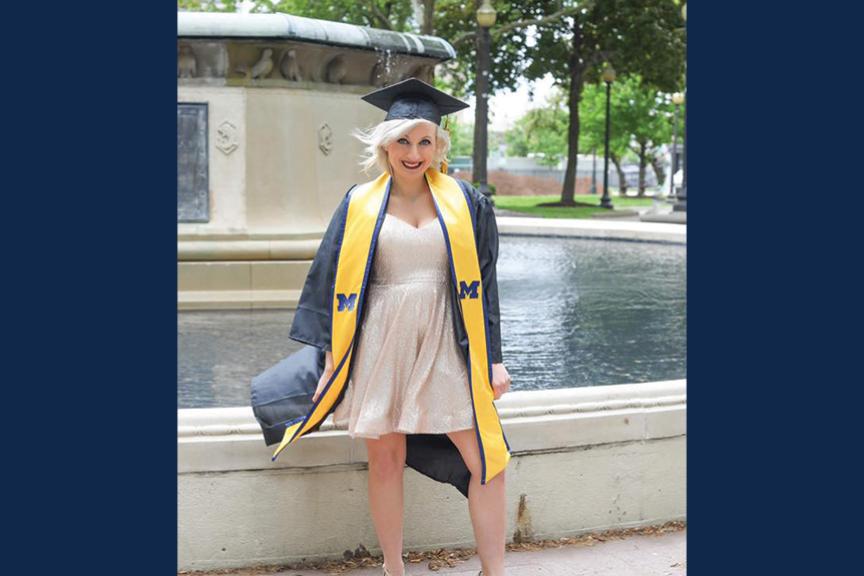 Like many of her classmates, Cierra Godsey (SM ’22) found her way to Sport Management through a childhood love of sports. But her path involved some life-changing twists and turns.

After high school, Godsey completed a year of college but then took time off to work. People warned her that if she didn’t finish college right after high school, she more than likely wouldn't finish at all. But Godsey was determined and, two years later, she was ready to continue her education in biology at Schoolcraft College in Livonia, MI.

The Friday before classes began, Godsey was in a terrible car accident. She sustained a three-millimeter frontal cortex brain bleed, a fractured humerus and femur, and emergency intubation that resulted in bilaterally paralyzed vocal cords.

Godsey was in a coma for 12 days. When she awoke, she was laser-focused on her recovery. It should have taken her six to eight months to walk again by herself, but with physical therapy and determination, she was walking in six weeks. She started taking medication and seeing a neuropsychologist to help with the mental changes she had noticed after her brain injury. Godsey’s paralyzed vocal cords made breathing difficult at times, but she refused to let that stop her.

I am so hard on myself and if I do something, I do it to the fullest. I applied for that next semester, with the brain injury from three months prior, and I took 16 credit hours.

“I am so hard on myself and if I do something, I do it to the fullest,” Godsey said. “I applied for that next semester [at Schoolcraft], with the brain injury from three months prior, and I took 16 credit hours.” She found that subjects that had come easily to her before the accident, like math, were now more complicated. She dropped some classes, continued working with her neuropsychologist, and got a tutor.

Ongoing orthopedic and airway issues from the accident forced Godsey to drop more classes, which affected her financial aid. She took even more time off because she had to pay for classes herself. It was a frustrating experience. “I don't know how people do part-time all the way,” Godsey said. “It seems like you're never getting anywhere.”

And yet, she persisted. “My ex-boyfriend and I went out to lunch one day and I was like, ‘I have to go [to Schoolcraft] tomorrow.’ He asked, ‘For what?’ and I responded, ‘I told you I was going back to school.’ He's like, ‘You've been saying that for a couple months now. I just figured you would come up with some excuse,’” Godsey said. “Well, don't tell me I'm not going to do something. So I signed up for winter 2018 courses [at Schoolcraft] the following week and started going full-time.”

Godsey was also still working full time. In addition to her primary golf course job, she picked up a second job at Mike's Pizza Bar in Little Caesars Arena and worked 20-35 hours a week. "I paid for my entire associate's degree, so I do not have any student loan debt from that," she said.

When she started back at Schoolcraft after her accident, Godsey’s academic advisor, Gary DeGuzman, began helping her plan her next steps. Godsey had always wanted to be a pediatric orthopedic surgeon but she also really loved sports, particularly ice hockey. “I grew up with a single teenage mom. My biological father was never in the picture,” she said. “My grandpa is like my dad; we've always been super close. I grew up watching hockey with him; the Red Wings were our favorite.” DeGuzman thought Godsey would do well with one of the majors in the School of Kinesiology and, if she changed her mind about going into medicine, she could pursue a career in sports instead. DeGuzman told her she would qualify for the Go Blue Guarantee, which would fully cover her tuition, and he helped devise her schedule to make sure all her credits would transfer.

To Godsey’s surprise, she was accepted into the Sport Management program for the fall of 2020. “I wasn't expecting to get into U-M because I'm so non-traditional,” she said. “I'm so much older. I took so much time off and got into some trouble when I was younger. I just created so many different and unnecessary roadblocks over the years that have made things more difficult than they ever needed to be.” Her grandpa was over the moon. “He's a diehard Michigan fan,” Godsey said. “I was always a [Michigan] State fan. So when I got accepted, he was so excited."

And then COVID-19 happened. All of Godsey’s classes at U-M were remote, which she found out right before they began. "I learn much better in person now," she said. "Because of my brain injury, I have exacerbated ADHD and anxiety. I can't stand sitting in front of a laptop all the time, especially six to eight hours a day for class and then another few hours to do homework. So I put a lot of stuff off until the last minute." Plus, due to state regulations, the bars and restaurants where Godsey worked had to shut down entirely for a time. But she kept going, taking out student loans so she could live in Ann Arbor.

Godsey wanted to make the most of her two years in the Sport Management program and knew that internships were integral to her experience. The summer before she began classes, she emailed multiple U-M Men’s Hockey staff members to ask if they were looking for interns. As a result, they brought her onboard for a role in the External Communications Department. Godsey also accepted a public relations internship at Tunnel Vision Sports, a start-up sport media company. And she continued volunteering for the Ted Lindsay Foundation, created by the Red Wings star to support autism research and educational programs for the southeast Michigan autism community.

Because of her outgoing personality, Godsey also networks organically wherever she goes. Once at a Detroit Red Wings game, she and her cousin Tyler started chatting with a man, Steve, and his young son, Colton. Godsey invited Steve to have Colton sit with them next to the visitor’s bench so he’d be closer to the action. Tyler, who works for Red Wings security, was also able to get Colton some game notes and a practice puck. And Godsey discovered that Steve is the Vice President of General Counsel for the Minnesota Wild. “I met and became friends with somebody [in the industry] because I said his son could sit with me,” Godsey said. “It's not even going out of my way; it's just being a good human being.”

Through her classes, internships, and networking, Godsey has decided to pursue a career in broadcasting, public relations, or media relations, ideally with the National Hockey League. And now, about a decade after she first began her education, her hard work, experience, and degree in Sport Management will help her achieve her goal.

In a fitting twist of fate, Godsey was the very last student to cross the stage at the School of Kinesiology commencement ceremony this spring. “It hadn't hit me that I was graduating,” she said. “And then once I was sitting [in Hill Auditorium], I was like, ‘Don't cry. Don't cry.’” It helped that her aunt and cousin were in the audience, cheering her on. Her grandpa also had fun at the Big House graduation that weekend. Godsey said, “He calls me all the time and every time he says, ‘Just called to say I'm proud of you.’"