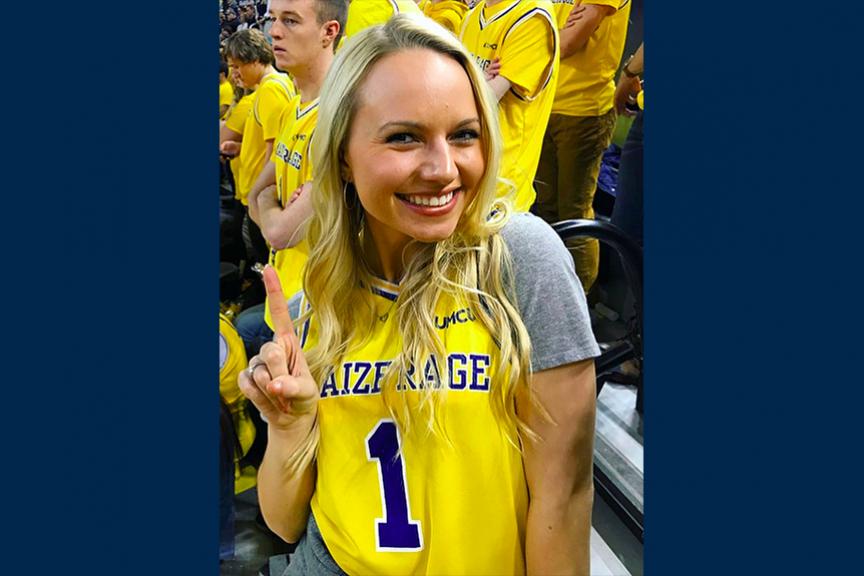 Williford has used various devices to study different parts of the human body, including Moxy, a muscle oxygenation sensor, and Athos, a wearable electromyography (EMG) device that measures muscle contributions.

Her journey began when she applied for an Undergraduate Research Opportunity Program (UROP) research project with Dr. Pete Bodary, clinical assistant professor of Applied Exercise Science and Movement Science. Bodary was looking for a student to help him test out and collect data using the G-VERT device, which measures jump count and can also tell one’s jump height, average g-force, and stress landings.

Williford spent the first semester learning the device, testing it out on her leg while running and jogging on different tracks around campus. Bodary then connected her with the U-M women’s volleyball team, which was also using the device in practice.

“After practice, I would give one of the assistant coaches a report on the data the G-VERT devices captured that day. For example, the reports indicated whether a player had a high-stress level or did an extremely high number of jumps. It was a way to quantify an individual player’s and the team’s practice,” she said.

Williford does caution that while the devices provide good feedback, the one drawback is you don’t always know exactly how an activity is being measured. She said Bodary continually reminded her to have a critical mind when interpreting the data.

Additionally, part of her UROP project involved aiding in Bodary’s MVS 452: Scientific Inquiry Using Wearable Technology class. She felt out of place as a sophomore in an upper-level class filled with seniors and graduate students, but she was challenged and enjoyed learning with and from the students. She was invited back the following year to be the course’s teaching assistant.

Williford can also be found in Bodary’s class sharing devices with students, testing out new ones, and helping troubleshoot any challenges the student groups have.

Williford has seen tremendous growth in the ability to capture and use data from wearable technology. “Companies are always coming out with smoother versions of their devices,” she explained. “When devices initially debut, there might be bugs, errors, or gaps in what you can do with the data, but over the years I’ve seen smoother versions and better applications of the devices.”

I’ve gotten a lot of experiences from being in the School of Kinesiology that has shaped my journey into medicine that I will carry with me.

She added that wearable technology is becoming increasingly popular with professional and collegiate sports teams, as well as the everyday athlete.

“I exercise every day and I have an Apple Watch, but I see people that like to work out getting more involved in things that can quantify what they’re doing,” she said. “People know how beneficial it is to be active every day and what intensity is best, so I think the devices will become more applicable to consumers who want to quantify how hard they’re working.”

Williford is currently leaning towards a career in sports medicine and orthopedics after graduating this winter.

“I think my experiences with wearable technology will help me in that realm. It taught me a lot about physiology and a lot of ways to quantify and hopefully prevent injuries,” she explained. “This experience has been so beneficial to me. In the field of sports medicine, it’s important to have that ability, if my patients want to use some type of wearable technology, to help inform them what would be the best one to use. It’s a new way of thinking and I’ll take that with me into the field.”

Williford credits the School of Kinesiology and Bodary for such an amazing foundation for medical school.

“I learned so much about the way the human body works, and the focus on anatomy and physiology has shown me my love of medicine and love of figuring out how the body works and moves,” she said. “I’ve gotten a lot of experiences from being in the School of Kinesiology that has shaped my journey into medicine that I will carry with me.”