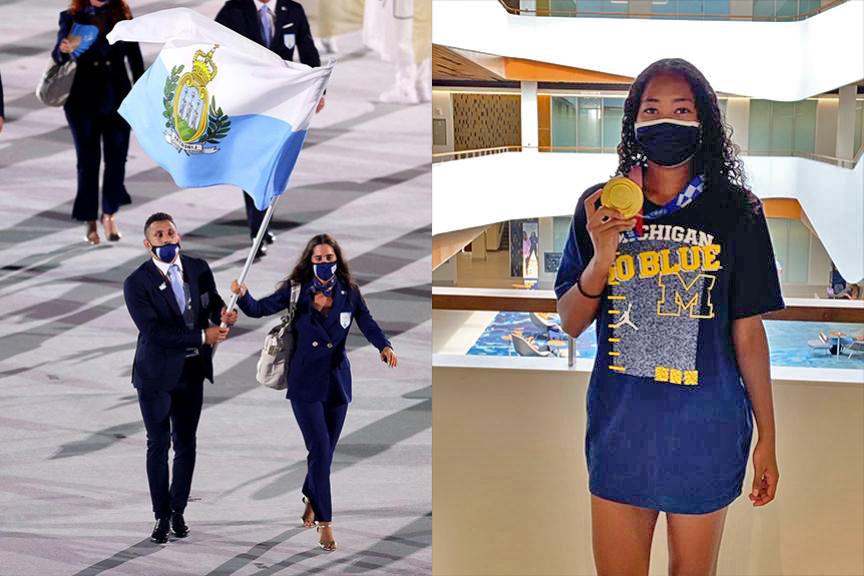 While Riviere has been on Canada’s senior national team since the age of 16, this was her first-ever Olympics – and she is still processing her experience. “Just being there and seeing the Olympic rings being plastered everywhere was a big moment for me in terms of realization that I was actually at the Olympics,” Riviere said.

Canada defeated Sweden 2-1 following a penalty kick shootout, earning the team’s first-ever gold medal after capturing back-to-back bronze medals in prior Olympics. Riviere said winning the gold medal didn’t hit her until she stepped onto the podium and heard her country’s anthem.

“It’s amazing to win gold in whatever sport, but I think for soccer, it meant a lot to our veterans, and it meant a lot to Canada because women’s soccer in Canada was always seen as ‘just a good team.’ So to be able to win, it just inspired our whole nation,” Riviere said.

While the Pickering, Ontario, native was only home for one evening before heading back to Ann Arbor to start her women’s varsity soccer season, it was quite the celebration. Riviere said her dad picked her up from the airport and as they were driving down their street, the entire neighborhood came out to cheer and celebrate her accomplishment. The only thing she could see was her neighbors applauding and posters taped to lampposts and fences.

Riviere said the coolest part was taking pictures with the neighborhood children and seeing their faces light up when she put the gold medal around their necks.

“For them to be able to wear it, to feel it, to take a picture with it, it represents more than just Canada soccer winning a medal. It was for all Canadians,” she said.

Riviere admitted that it still hasn’t sunk in that she’s an Olympic gold medalist. However, she is quickly shifting her focus to U-M’s soccer season before turning her attention to qualifying for Canada’s 2023 World Cup team.

She’s also looking to combine her Movement Science degree with a minor in marketing or business to set herself up for a career after playing soccer professionally overseas.

Riviere said she finds herself relating what she learns in her Movement Science classes to her everyday training regimen. She quizzes herself during sessions with U-M athletic trainers by naming bones when discussing various injuries that pop up throughout a typical season. “Even when I’m running, I’m wondering if my gait motion is normal,” Riviere said. “I love being able to study my own body.”

Amine, a dual citizen of the United States and San Marino, felt great pride representing his family’s heritage during the Olympics. San Marino is a small, mountainous microstate surrounded by north-central Italy. It has a population of about 34,000 and is one of the oldest republics in the world.

Amine wrestled in the men’s freestyle at 86 kilograms and went 3-1 during the week, defeating India’s Deepak Punia at 3-2 to win the bronze medal. Amine said the match went by in a blur and that he doesn’t remember the last 30 seconds. He was trailing 2-1 with 10 seconds left before executing a single-leg shot to win. However, his opponent challenged the result.

“There was some uneasiness going through my head. I was holding my breath until they denied the challenge, and about a minute went by before they reached a decision,” Amine said. “And then they announced they denied it, and my hands just went up like, ‘wow, it happened!’”

Wrestling at the Olympics wasn’t the only highlight for Amine. A few weeks before the Olympics, he was on a Zoom call with San Marino’s Olympic Committee when they announced he would be the country’s flag bearer during the Opening Ceremonies.

“It was a wild moment where everything paused. I sat there and thought about all the Olympic Ceremonies I watched over the years. I had to pinch myself to think about the fact I was going to be one of those people I always looked up to and watched on TV,” he said.

Amine added that even though the ceremonies consisted of a lot of standing around, it was all worth it. He had to wait outside in a full suit in the Tokyo heat for three hours before proceeding. “I know my family, my whole community, and even people in the most remote places in the world were seeing me at that moment. I just smiled and kept walking because I didn’t want to get too nervous. Being in that parade with the best athletes in the world was something I’ll hold close to me for the rest of my life,” Amine said.

Amine, who received his undergraduate degree in business from Michigan Ross, has always been interested in combining his passion for sports with business. His goal, after earning his Sport Management master’s degree and wrestling professionally, is to work in the athlete endorsement field.

“
I just smiled and kept walking because I didn’t want to get too nervous. Being in that parade with the best athletes in the world was something I’ll hold close to me for the rest of my life.”
—Myles Amine

While he has only done graduate coursework virtually, Amine is impressed by Sport Management’s teaching style and real-world examples.

“One of the many things Sport Management does well is allowing us to make tangible changes to companies where we are giving presentations that can be implemented,” he said. “A lot of school is just learning through experimentation, but there are not any changes being made; however, this progressive style of teaching where companies are working with students and receiving implementable suggestions is something I thought was so unique.”