May designated as "Michigan Moves Month" by governor

AES faculty member Michael Stack authored the declaration, which was announced on April 29. 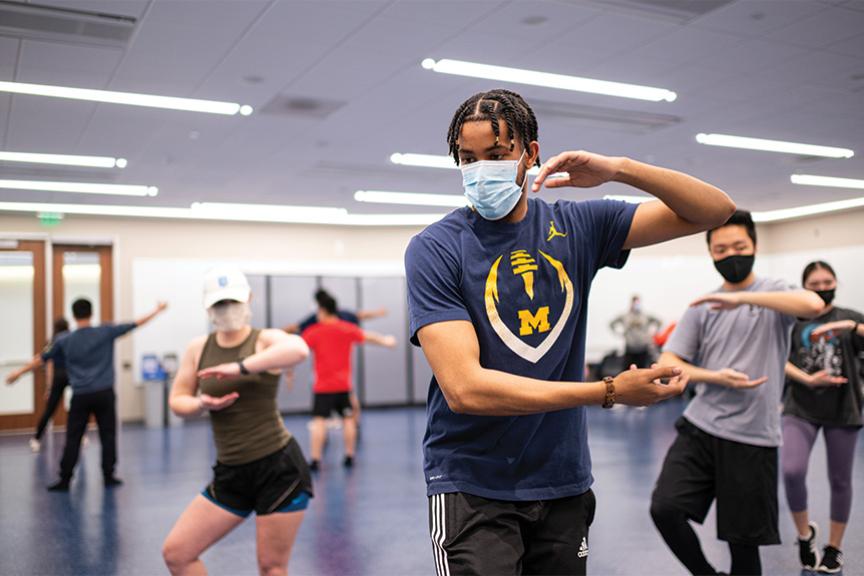 Fitness specialists across the state of Michigan are taking aim at helping Michiganders improve their physical and mental health.

The proclamation, which Applied Exercise Science Lecturer Michael Stack (MVS ‘04) drafted, declares the importance of physical activity for one's physical and mental health, especially during the pandemic. According to Stack, incorporating as little as 15 minutes of daily physical activity can reduce depression by 26%. He also said that additional research showed a 20% reduction in developing anxiety by maintaining higher levels of physical activity.

Previous physical activity campaigns focused on informing the public on how to become more physically active. Despite previous efforts, approximately 50% of Michiganders do not meet the Centers for Disease Control and Prevention recommendations for overall physical activity.

However, this proclamation is reframing the argument. It's targeting lawmakers, public health officials, the medical community, and the media to raise awareness that physical activity can be a public health solution.

“Previous campaigns about physical activity were that it's a nicety, and in some cases, entertainment or a luxury,” Stack said. “The MFCA is saying to the people making policies and decisions that physical activity is a liable medical and public health intervention to not only address chronic physical disease but more importantly and more saliently, mental health. We’re trying to get them to understand the robust effect that activity can have on physical and mental health and how easily it can actually be to operationalize it as part of a treatment plan or public health strategy.”

“Exercise helps you feel better; it helps build resilience. Exercise builds social and emotional skills that kids, parents, adults, and aging seniors can use to help cope with some of the stresses we continue to deal with during this pandemic,” she said.

Stack, who serves on the MFCA board of directors, realized the messaging could be more impactful if the physical activity stakeholders statewide came together with a unified voice. He worked with Tony Moreno, a member of the Governor’s Council on Physical Fitness, Health and Sports, to get the proclamation in front of the governor.

Hasson, who developed at-home and in-school exercise programs through InPACT@Home and InPACT@School, called this proclamation “beautiful.”

“There is this heightened awareness and dissemination of physical activity resources at a time when people need it the most,” she said. “We know that physical activity has declined dramatically as a function of the pandemic. So the more that we can re-energize and re-activate people to get off the couch and get outside, this will be great for the public health of Michigan.”

“We’re trying to simplify the term ‘intervention’ in policymakers’ minds. The idea is to co-create what the physical activity environment looks like here in the state,” he said.

This month’s key event was the Michigan Moves Month Webinar featuring Elizabeth Hertel, director of the Michigan Department of Health and Human Services. Leaders from key physical activity organizations in the State of Michigan (MFCA, Governor’s Council on Physical Fitness, Society of Physical Educators, and mParks) joined Hertel to discuss strategies, initiatives, and programs to help get Michigan moving.

Michigan Moves Month serves as the launch point for the Michigan Moves coalition. The goal is to have a monthly initiative that runs indefinitely. Stack said May is the hallmark month because it ties in nicely with National Physical Activity Month and Mental Health Awareness Month.

The MFCA formed in May 2020, during the height of the pandemic, to figure out the threat to the fitness clubs and gyms around the state following the stay-in-place order. Now, the group has shifted its focus to strategically figure out how it can be a part of the healthcare delivery system and not just a luxury item or an option for the fit.

“The commercial health and fitness industry serves 20% of the population. The other 80%, those are the ones that are most important to serve,” Stack continued. “Our strategic objective is, ‘How do we become a part of the healthcare delivery system?’ It’s through coalitions like Michigan Moves and by aligning with other physical activity stakeholders that we can begin to position ourselves there.”

Stack’s goals for the upcoming year are 1) to grow MFCA membership; 2) to conduct an action plan review; and 3) to develop a strategic engagement plan for lawmakers, public health officials, and the medical community that addresses the physical activity needs of the communities MFCA members reside.

He would also like to broaden the stakeholder base by connecting with members of the academic community and city planning organizations to obtain their insight.

“I don’t have the answers to how policy needs to change, but I know the dramatic impact that physical activity can have on population health,” Stack said. “Now, we need to work with policymakers to see where the on-ramps are from a policy perspective to actually effectuate substantive change.”